When pups transition from breeder to family, one of the most critical components I stress to folks - no. dietary. changes. At least not for now. The stress of puppy leaving everything he knows is real, and unfortunately can result in digestive upset. Change pupper's food and introducing rich treats right off the bat is going to put a serious kink in your house training efforts. It'll get messy and quick.

If you feed it, it must be good - right?

Well, we like to think so! We've been with several brands over the years, and here's the thing with dog food: it changes. And change doesn't always equal better. When we notice changes taking place in our dogs, well ... we notice. (Yes, I've been known to poke the poo with a stick - you can learn a lot about your dog from his gifts!) Runny poop is always alarming, but especially in a puppy with a young immune system. Things can go downhill in a hurry.

Early 2019, we started noticing some issues with our parent and puppy diets. We’d been feeding the same stuff for two years and were satisfied .... until we weren’t. I’ll spare you the details, but runny poops was the biggest problem. Which always freaks me out because I imagine the worst. Attempts to get answers from the provider were unsuccessful. Did the formulary change? Were ingredients being sourced differently? Non-answers and a general lack of customer service. Our monthly feed bill is pretty hefty, and I wasn't feeling the indifference - and I was soooo over the bad poop - so we walked away.

PawTree is what's next. The trial run with a new product began in February, and not long after, I felt comfortable changing my whole crew, and recommending the new food.

I threw it out there on the private clients-only FB group (The GVD Gathering Place) for anyone who was experiencing the same. Since then, similar complaints/issues with the old food continue to trickle in, and I realized my communication wasn’t reaching all the folks who have our pups. Hence this post.

The issues our families seem to be having with previous food ranged from loose stool, allergies, disinterest in meals. If it ain't broke, don't fix it. But if you need a change, this is the Tried and True at GVD. They have several flavors - ours seem to prefer salmon and sweet potato. They also love the PawPairings, a sprinkle on seasoning, that changes things up and keeps them interested in their kibble.

Other products we’ve been impressed with are Chillax - an organic calming chew for the nervous nellies, and Salmon Drops for shiny coats and eyes. Both are fabulous in keeping our nursing mommas in top condition, so imagine what they can do for a doggie who isn’t feeding ten pups!

It’s not the most expensive food out there, but it’s not the cheapest either. I never mind spending more for quality, especially when it comes to our dogs’ health and diet. It just isn't an area where I feel comfortable cutting corners. While I was afraid my food budget was about to be blown, it actually ended up being a wash. They eat less of it since it isn’t full of fillers, so it goes further. And less poop with less smell makes it a total winner.

This is what all of our pups go home eating ... give it a shot if you're looking for a change. Pawtree Real Salmon Peas and Sweet Potato. Mine like all the flavors, but this seems to be their fave.

Why Nursery Visits Are A No-Go For Your Doodle Puppy 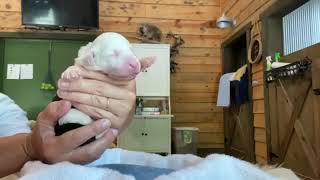 I'll take the dog breath, thanks!